Harry Potter fans can now enjoy a city break inspired by all things Hogwarts after a homeowner turned her terraced house into a wizard-themed Airbnb.

Hannah Chapman, 29, spent three months renovating the £232,000 two-bed property in York with an interior that promises levitating candles, a potion cabinet, and a cauldron.

From £198 a night, visitors can bed down in a set of Potter-themed bunk beds, just like Harry, Hermione and Ron did at the fictional wizard school.

The bathroom has a distinctly ‘Slytherin’ feel – one of Hogwarts ‘houses’ – with green tiling and a metallic snake weaving its way up the sink.

For the warm summer evenings, guests can also retire to the courtyard, where there is a chimenea fire pit to sit around and tell spooky stories.

Chapman, who spent £40,000 converting the house, said it offers guests an ‘escape from reality.’ 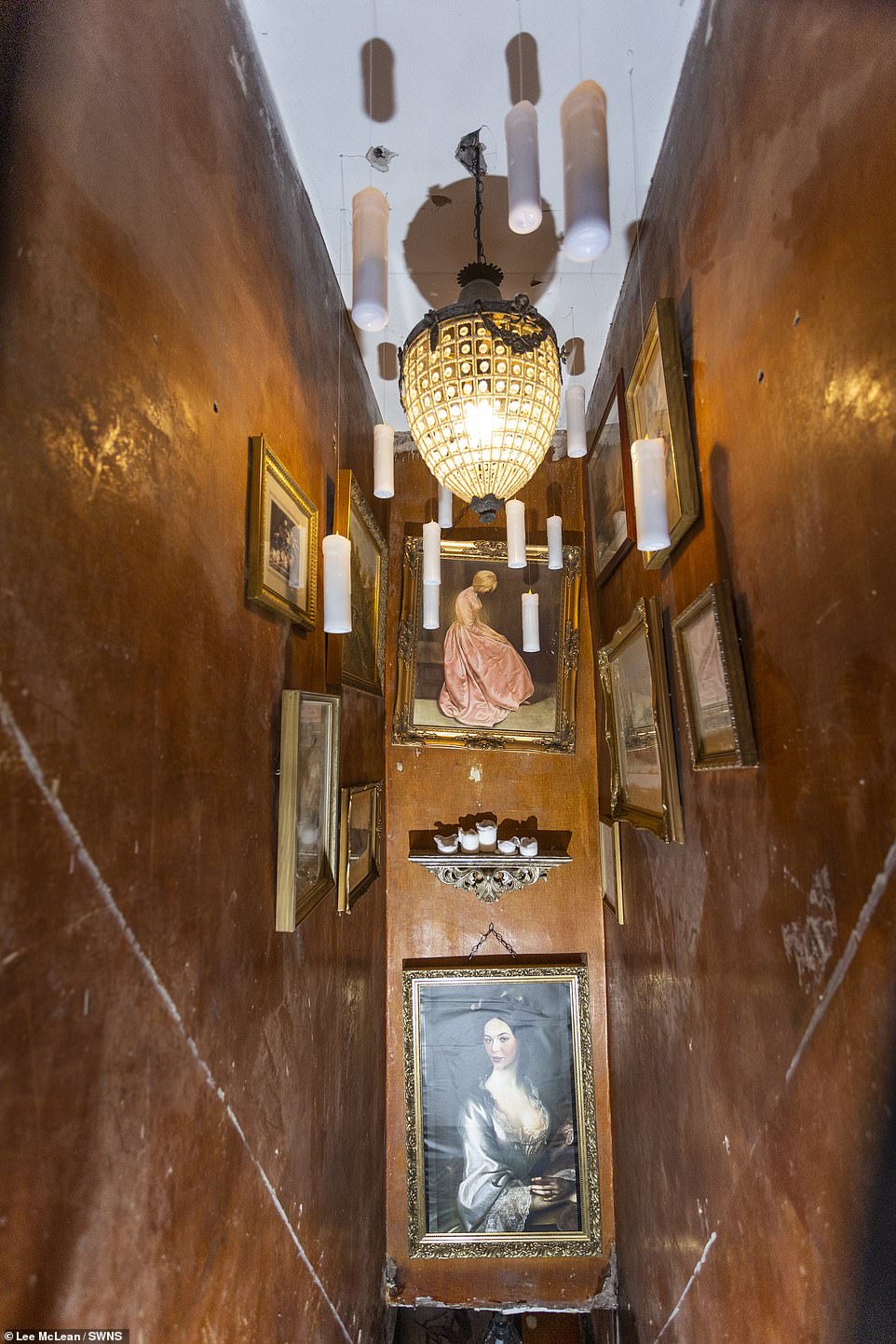 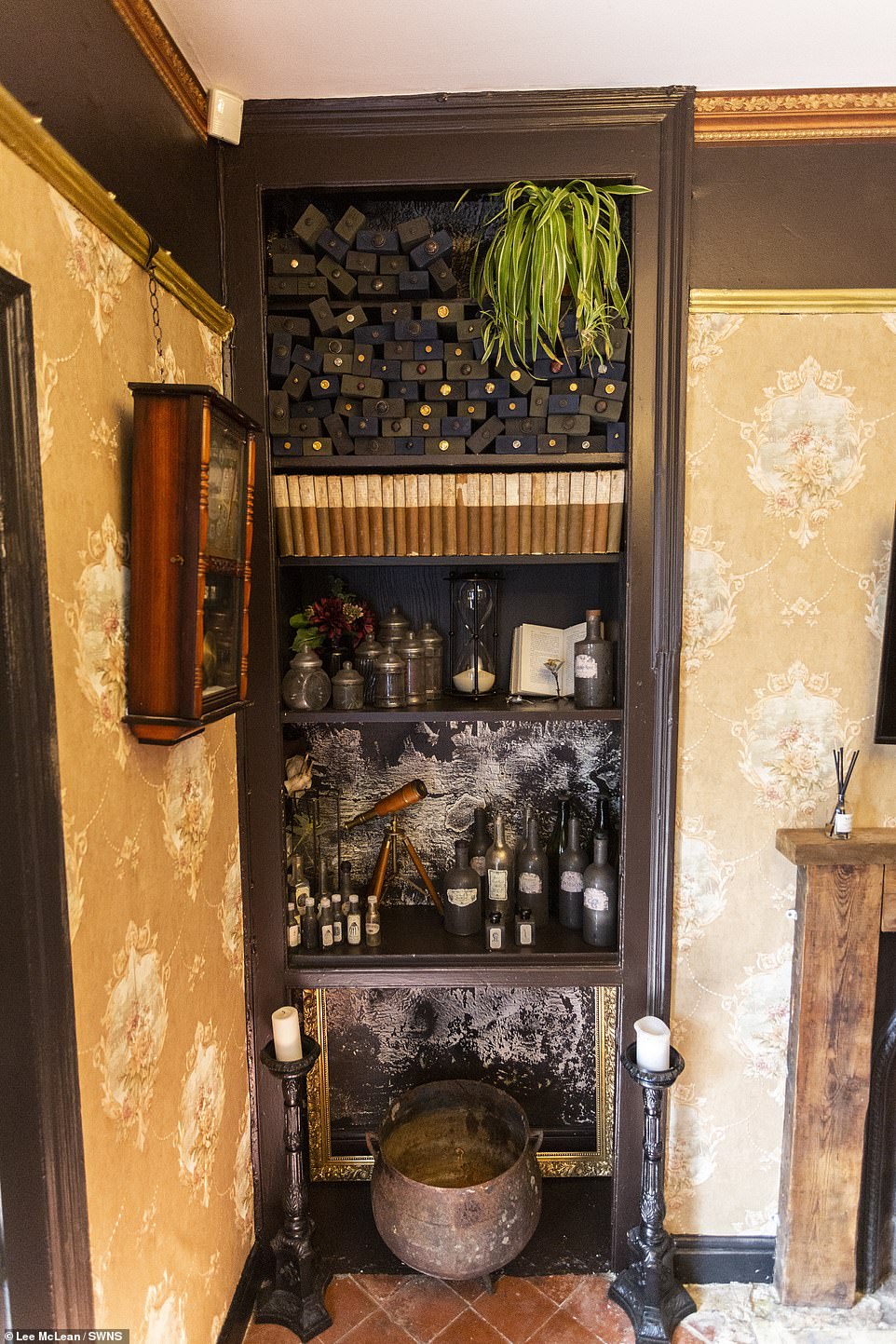 Chapman has even created a potion nook in the kitchen, complete with a cauldron, vials and a potion-making book, as well as a selection of wands

She said: ‘Some people might find it a little spooky if they come to stay, but the house generally gives a warm and comfortable feel.

‘There’s no dark magic. We’ve only got friendly love potions in there – so nothing bad.

‘And if you’re a Harry Potter fan in particular, or if you like that sort of thing, then you’ll just find it very cosy.’

The designer had ambitions to embark on the project several years ago after spending her childhood consumed by magical stories – from Hocus Pocus to Harry Potter. 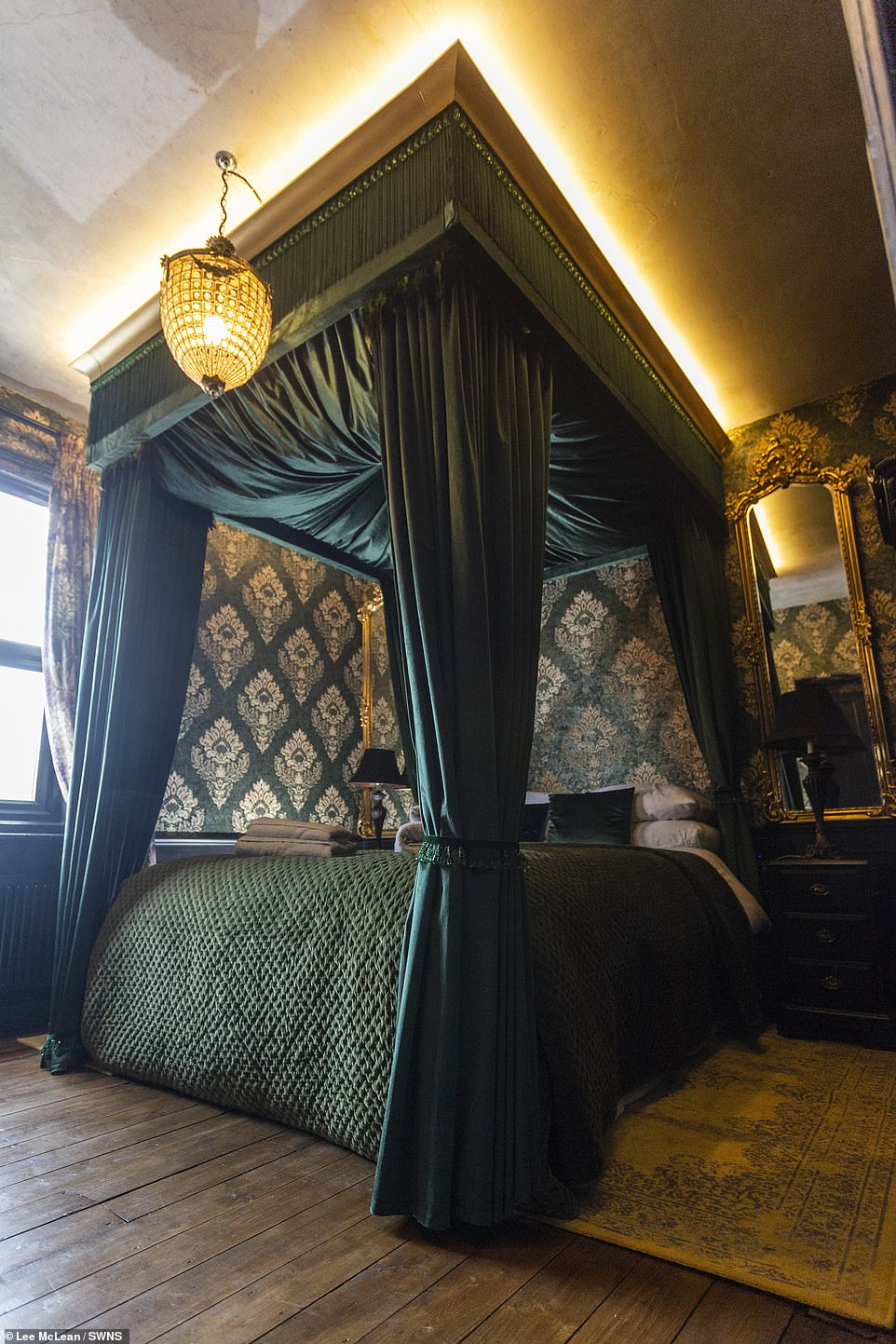 Four poster: The savvy home-owner revealed her favourite room is the master bedroom, which includes a custom-built bed 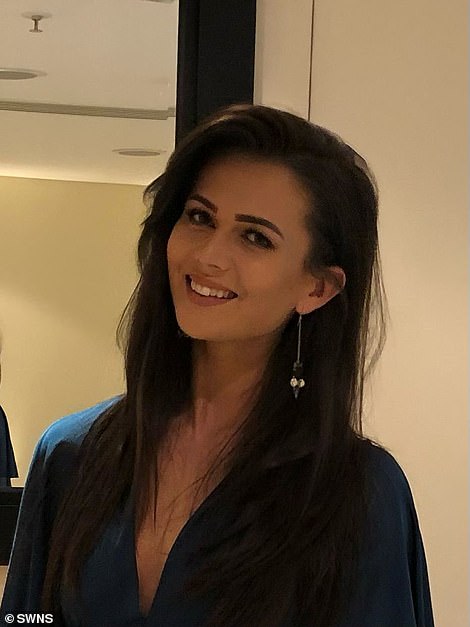 The Airbnb host spent £40,000 on the Harry Potter-inspired makeover and hopes it will be a lucrative summer business

And when she finally got her hands on the keys to the late 1800s property in York, she stripped it back to reveal its ‘beautiful’ original features.

Hannah said some guests might find the property a little ‘spooky’ but added there was no ‘dark magic’ to be found in the gothic styled terrace.

Hannah moved to York in her 20s to study at the Northern College of Costume, and had later hatched a plan to one day create a magic-themed home.

She said: ‘I’ve always grown up with Harry Potter, Hocus Pocus, The Adams Family, and I’ve always been interested in the magical side of things.

‘And I just wanted to create something unique that reflected York quite well, because the city has quite a lot of history, and lots to do with Witchcraft as well.’

When Hannah moved into the property – called 101 House At The End – in January this year, she stripped back years of decorations and restored the home to its former glory.

She said: ‘It was covered from top to bottom in a grey carpet, and it had this textured wallpaper in every single room. 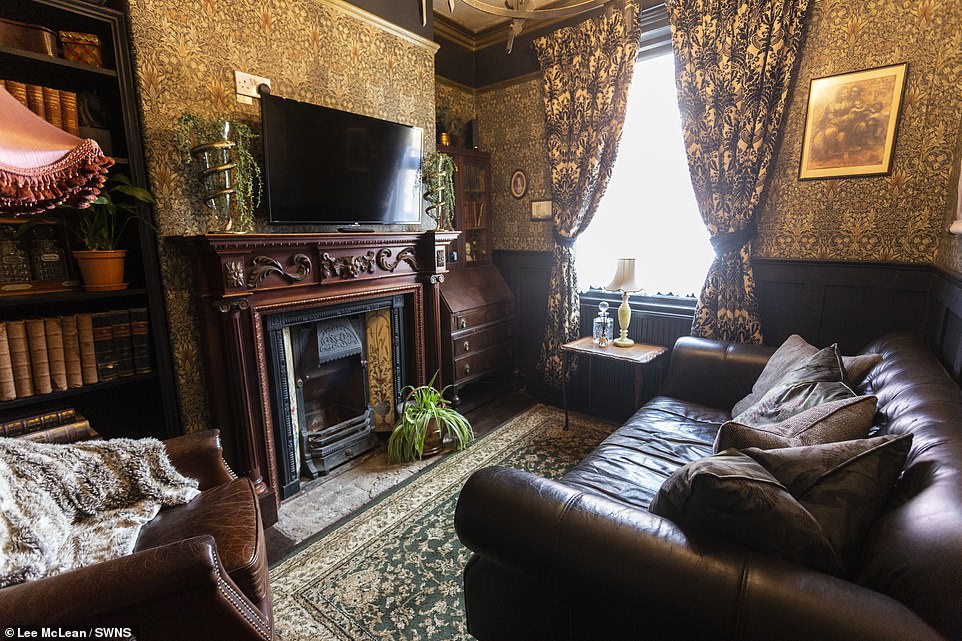 Step back in time: All the rooms have been modelled around the aesthetics of the Harry Potter film, combining old-fashioned cosy interiors with deep hues 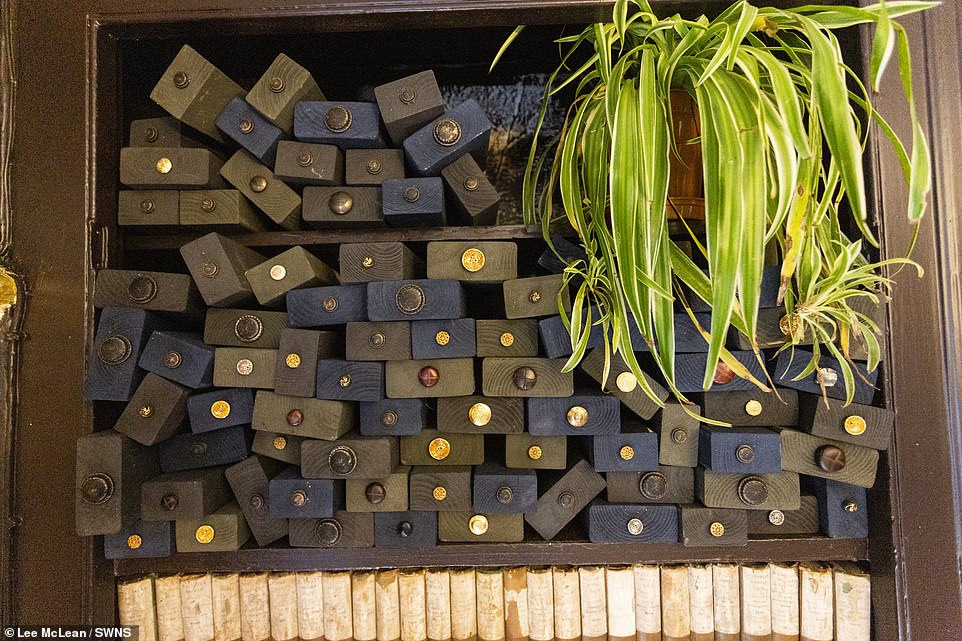 Fans of Harry Potter will be delighted by the amount of details Hannah, who is a fan of the books and the movies, has put into the Airbnb. Her ‘potion’ nook was decorated with different door handles and old books 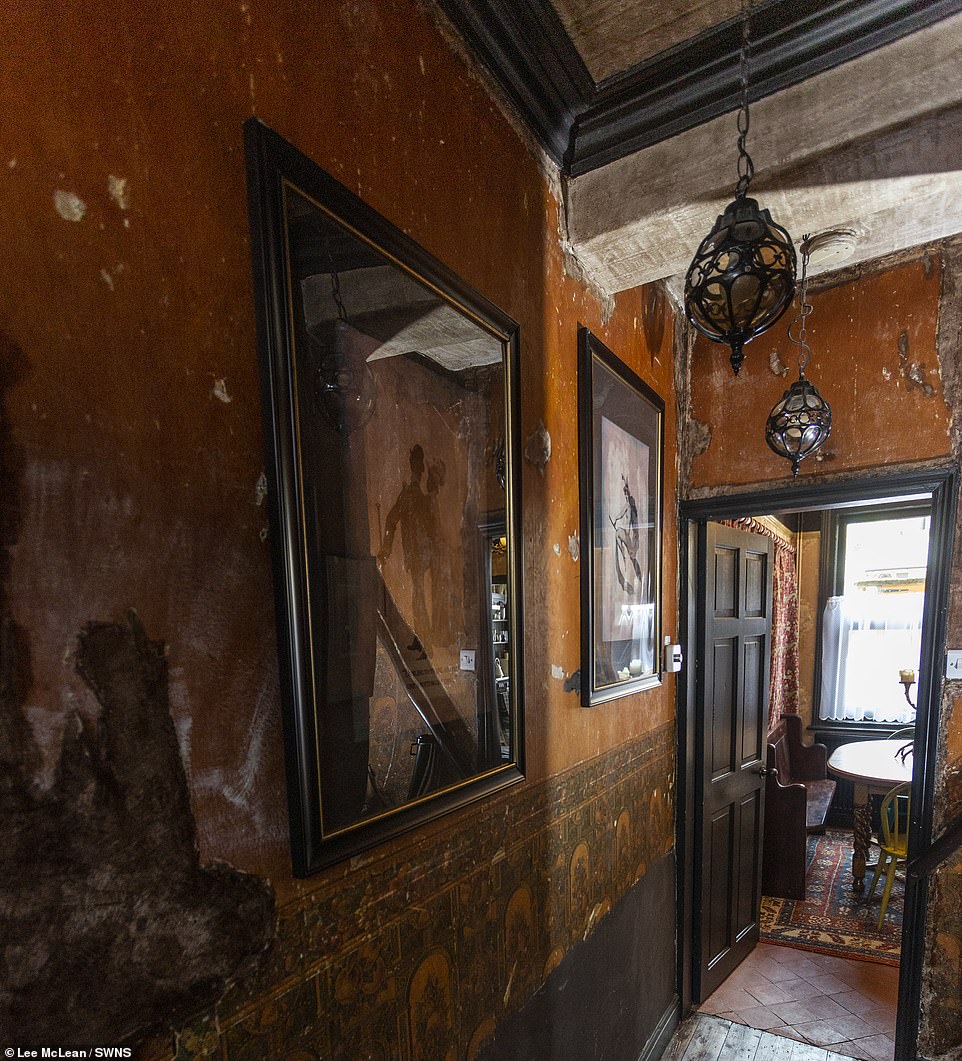 In order to achieve the same looks as the Harry Potter movie set, Hannah ‘aged’ her property by scraping wallpapers on the walls and furnishing it with vintage mirrors and lamps 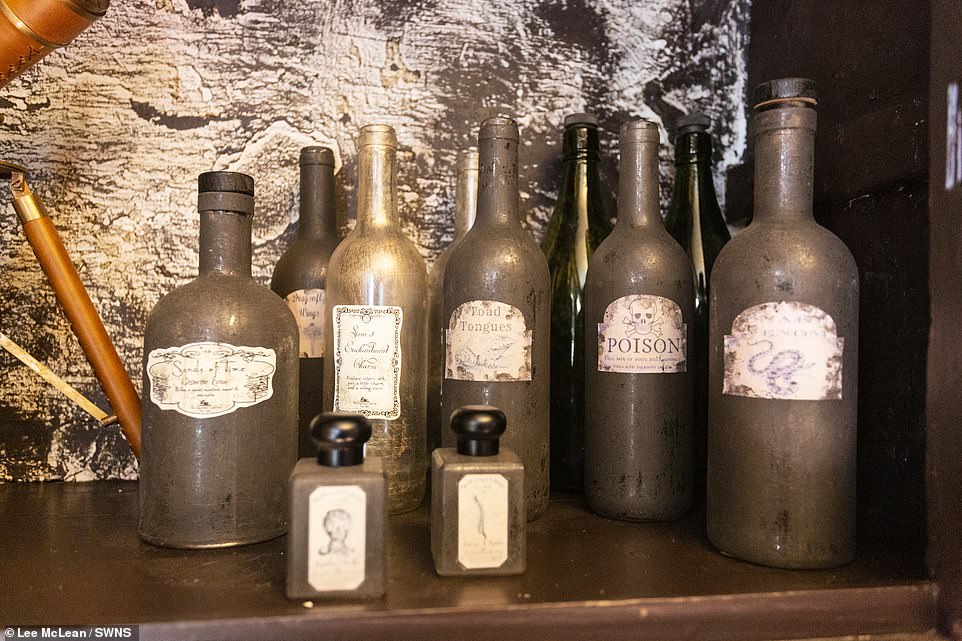 Several vials and potions bottles labelled ‘poison’ or ‘toad tongues’ have been laid out around the property, in keeping with the spooky, magical theme 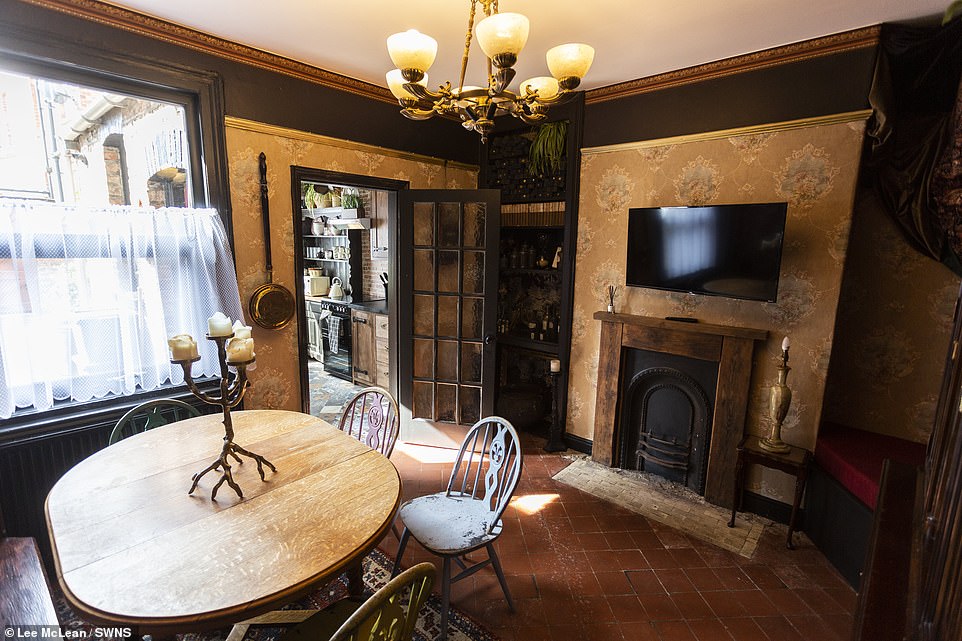 The foyer of the house opens to the kitchen, where there’s a wooden fireplace, vintage chandelier and shabby chic chairs… the perfect spot for a magical breakfast 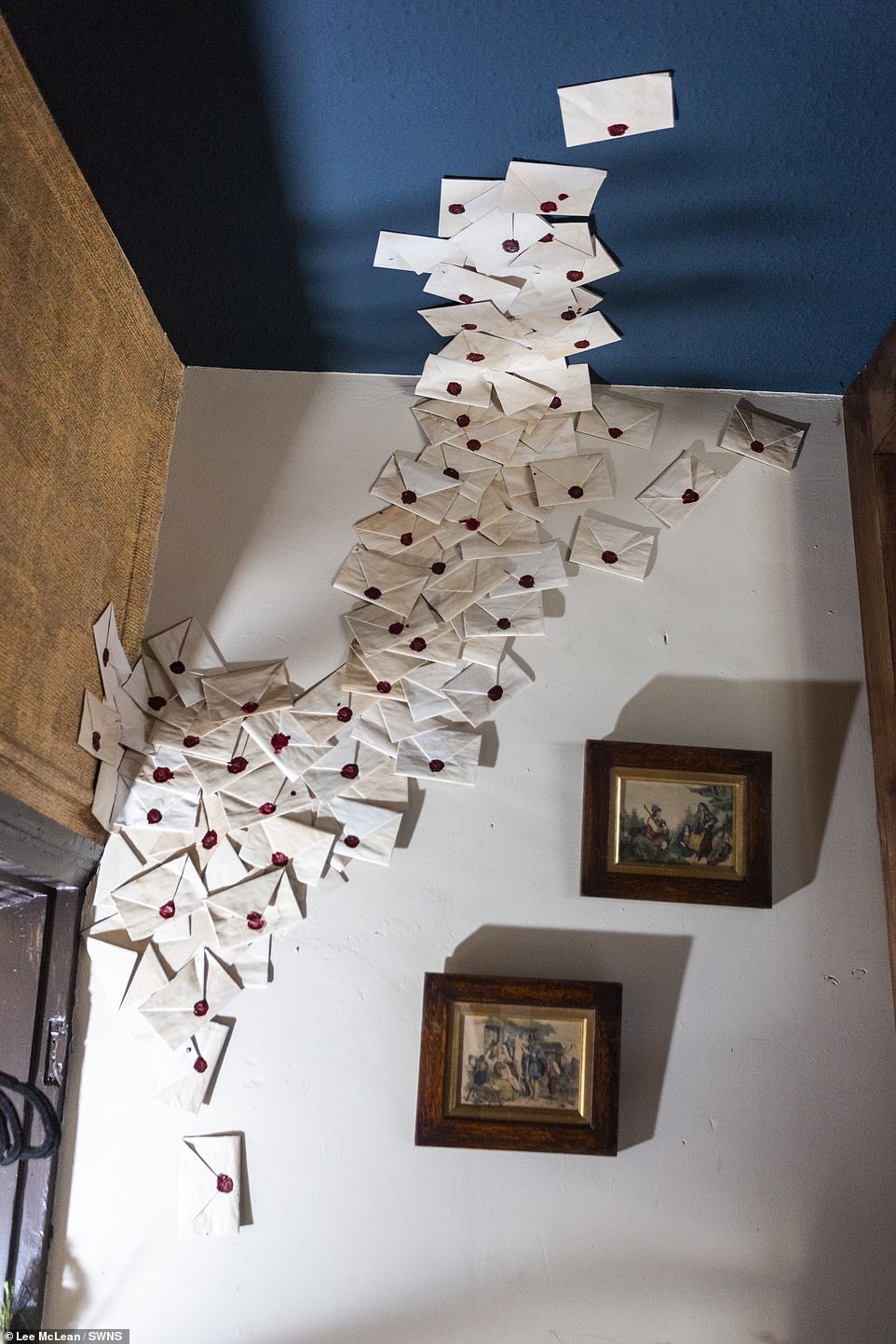 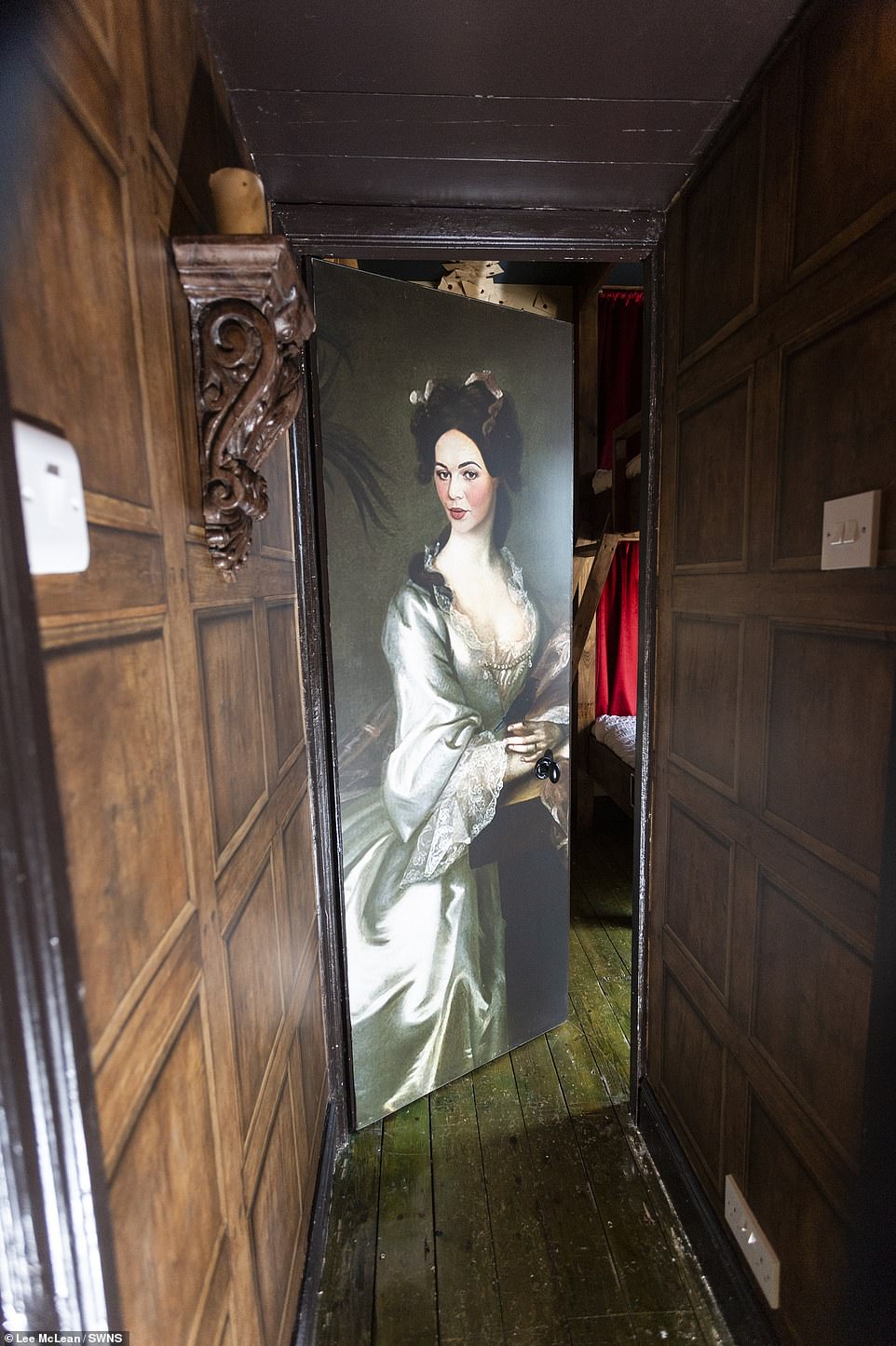 The property owner also covered a door leading to the Slytherin-inspired bedroom with a full-length portrait. In the Harry Potter movies, animated portraits can guard common rooms of the four different school houses

‘So we just took everything out and stripped it back to the bare bones to see what the property had to offer.

‘In the hallway and all the way up the staircase was this beautiful, original wallpaper, dating back to the Victorian or Edwardian times, so we wanted to keep that feature.

‘Nearly everything – 85 per cent of the contents of the property – was sourced from charity shops, recycling centres, eBay, and Facebook marketing groups.’

Among the home’s most unique features there is a levitating candle display that can rise and fall with the touch of a ‘wand’ remote. 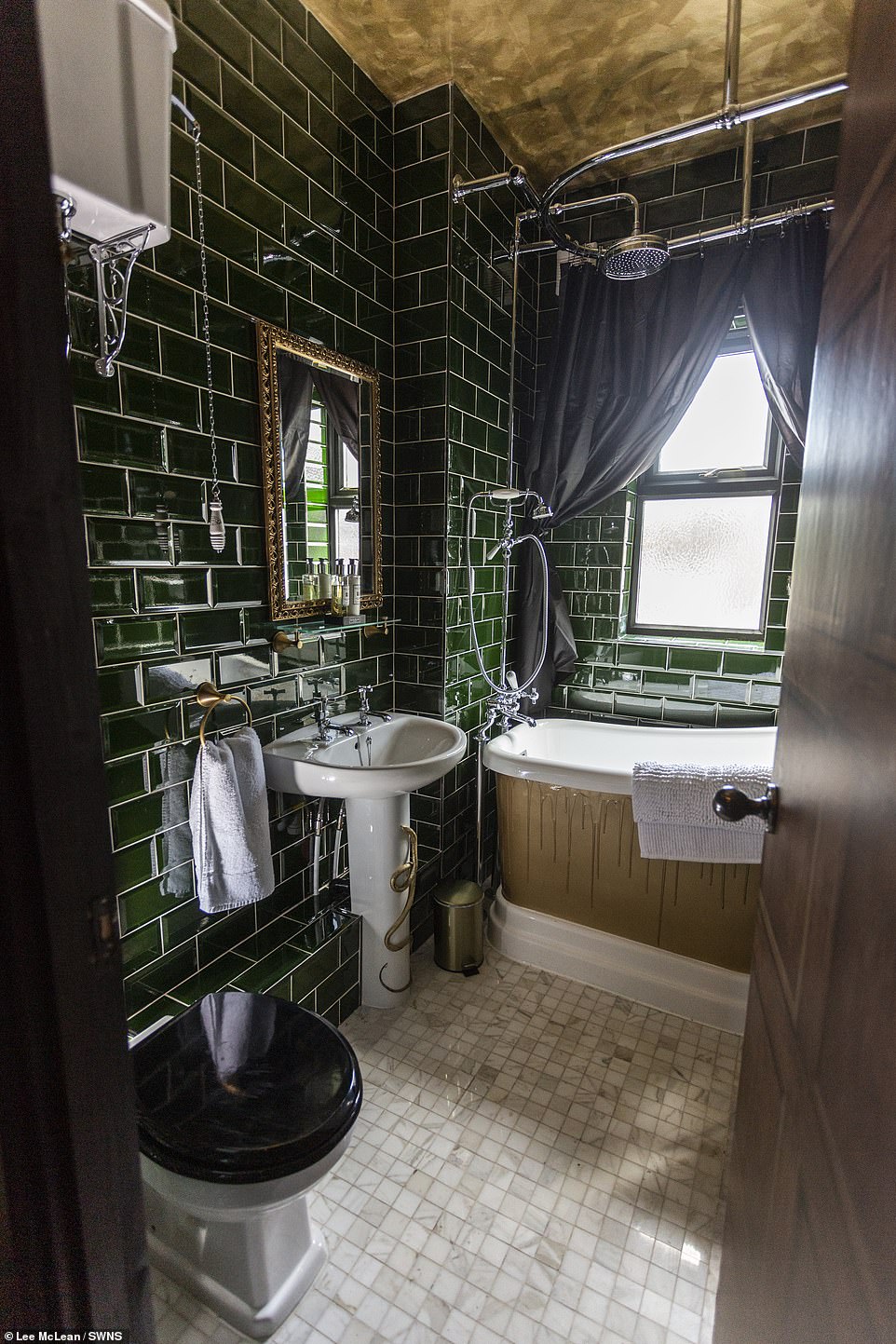 At first glance, this bathroom looks like any other, but the snake fixed to the sink definitely exudes a Harry Potter vibe 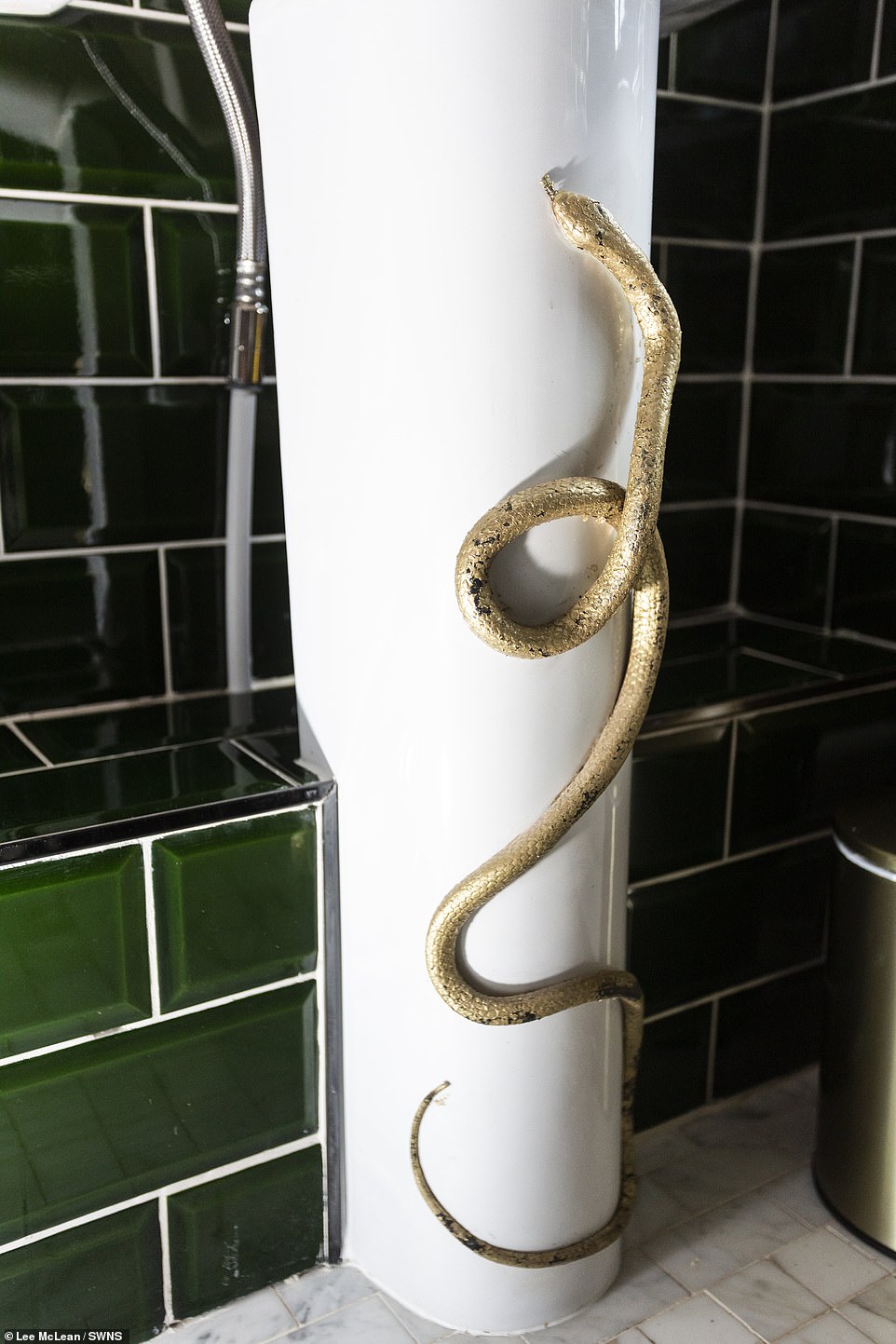 A closer look at the snake Hannah fixed to the sink to give her green bathroom a Slytherin feel. The snake is a reference to the second Harry Potter book and movie, Harry Potter and the Chamber of Secrets, where a sink is the hidden entrance to the aforementioned chamber 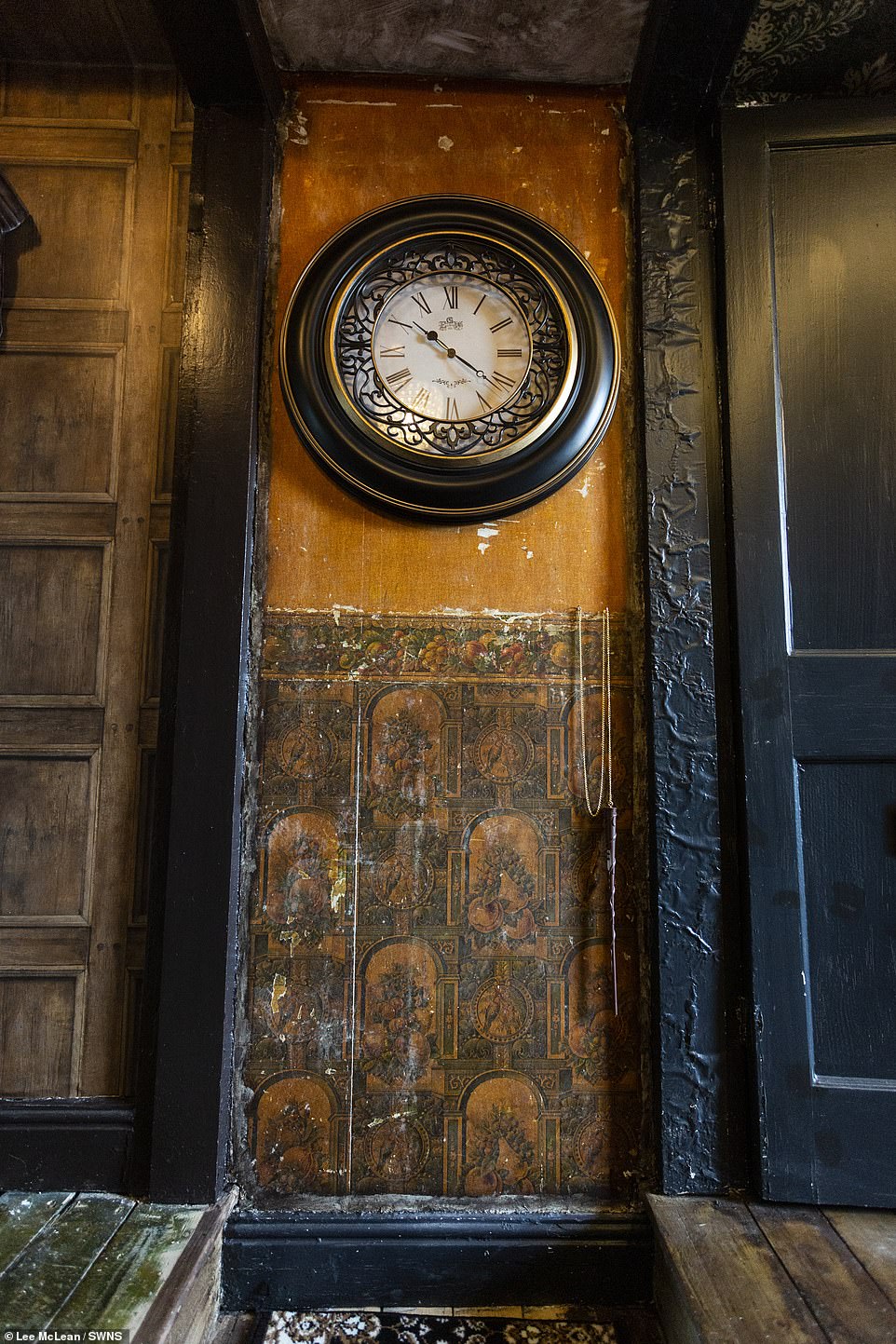 Hannah took great care in aging her house’s floors and walls. In the entrance of the house sits an oversized cinematic clock 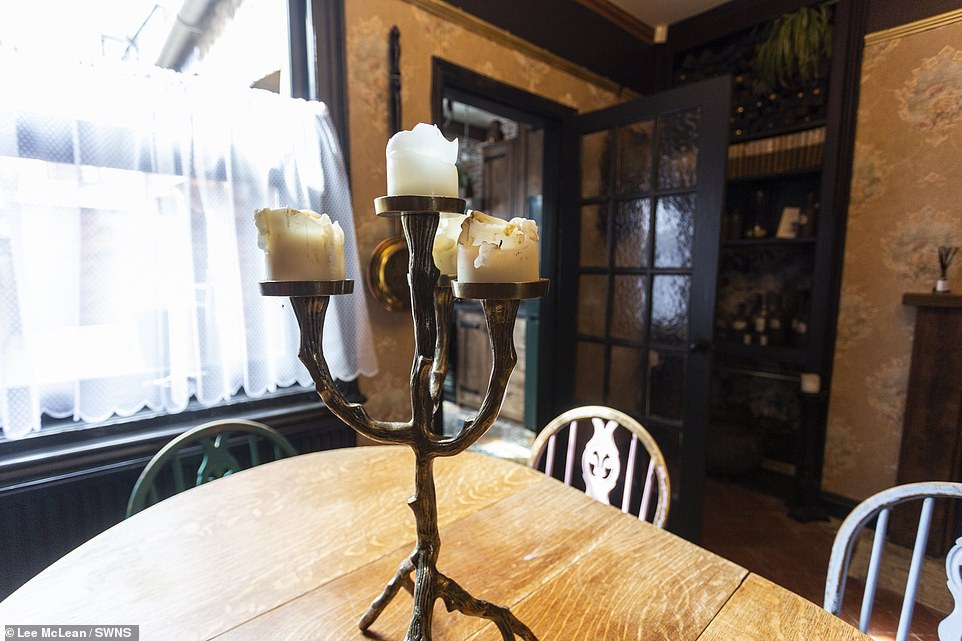 Other touches include melted down candles, like someone just left, and a tree-inspired chandelier 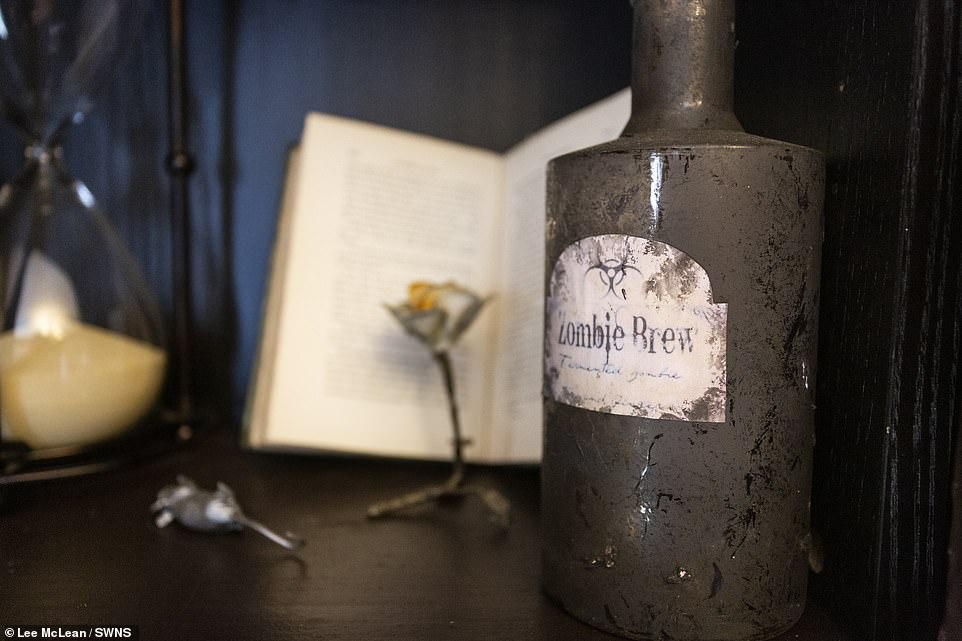 An ominous dusty bottle labelled ‘Zombie brue.’ next to a potions book, flowers and various vials can be found in one of the bnb’s rooms 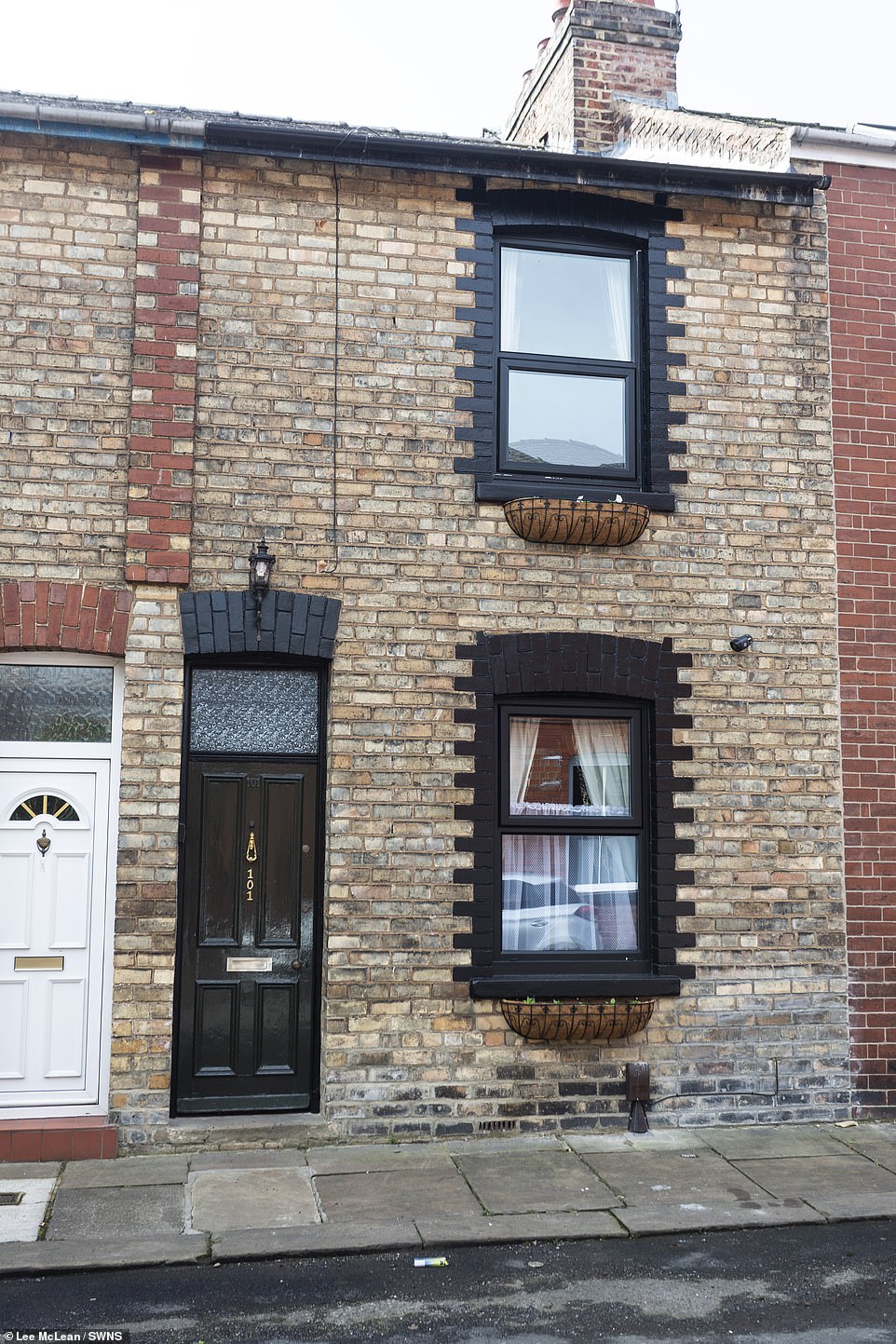 From outside, the house looks like any other property, but Hannah painted her door and windows black so that people definitely know they got the right address for their Harry Potter-themed stay

But Hannah said she was most proud of the ‘Emerald Bed Chamber,’ located upstairs, which has a hanging chandelier – and a four-poster bed.

She said: ‘My favourite room is the Emerald Bed Chamber because we actually made that bed.

‘It was too big to bring it upstairs in one piece, so we had to make it ourselves – custom built to size – and we attached the curtains and canopy around it.

Harry Potter fans will also delight at the snug, located just below the staircase, which is equipped with its own potion cabinet and a cauldron.

Hannah explained: ‘There is a lovely originally bookcase in the corner, which is called the “book nook”, where there’s a little potions cabinet and some homemade potion bottles.

‘And we found a beautiful iron cauldron, which we placed in there, too.’ 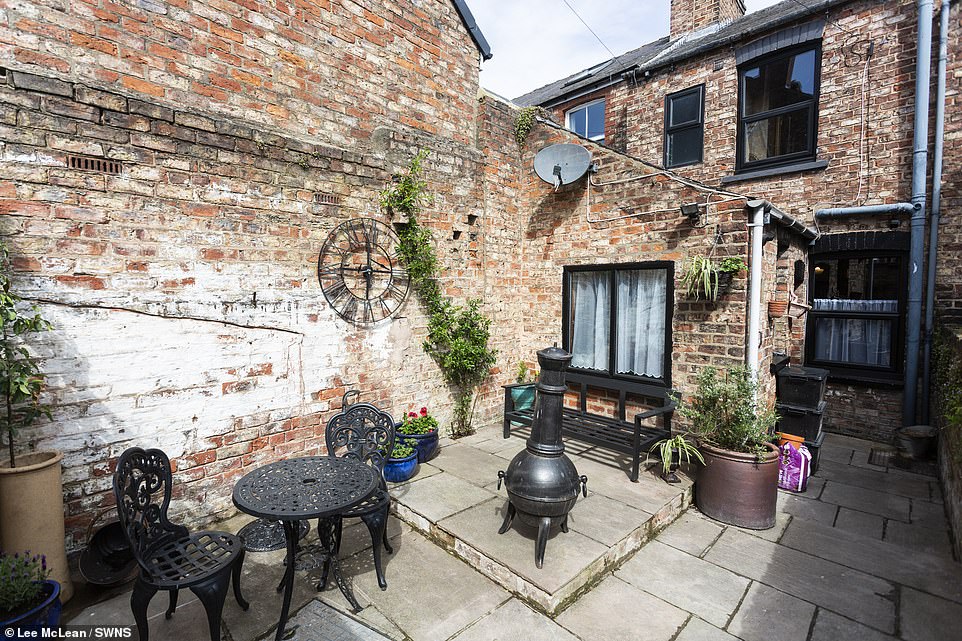 Even the house’s terrace has some Harry Potter touches to it. Hannah propped it with a black iron table and chairs and a vintage iron clock and woodburner 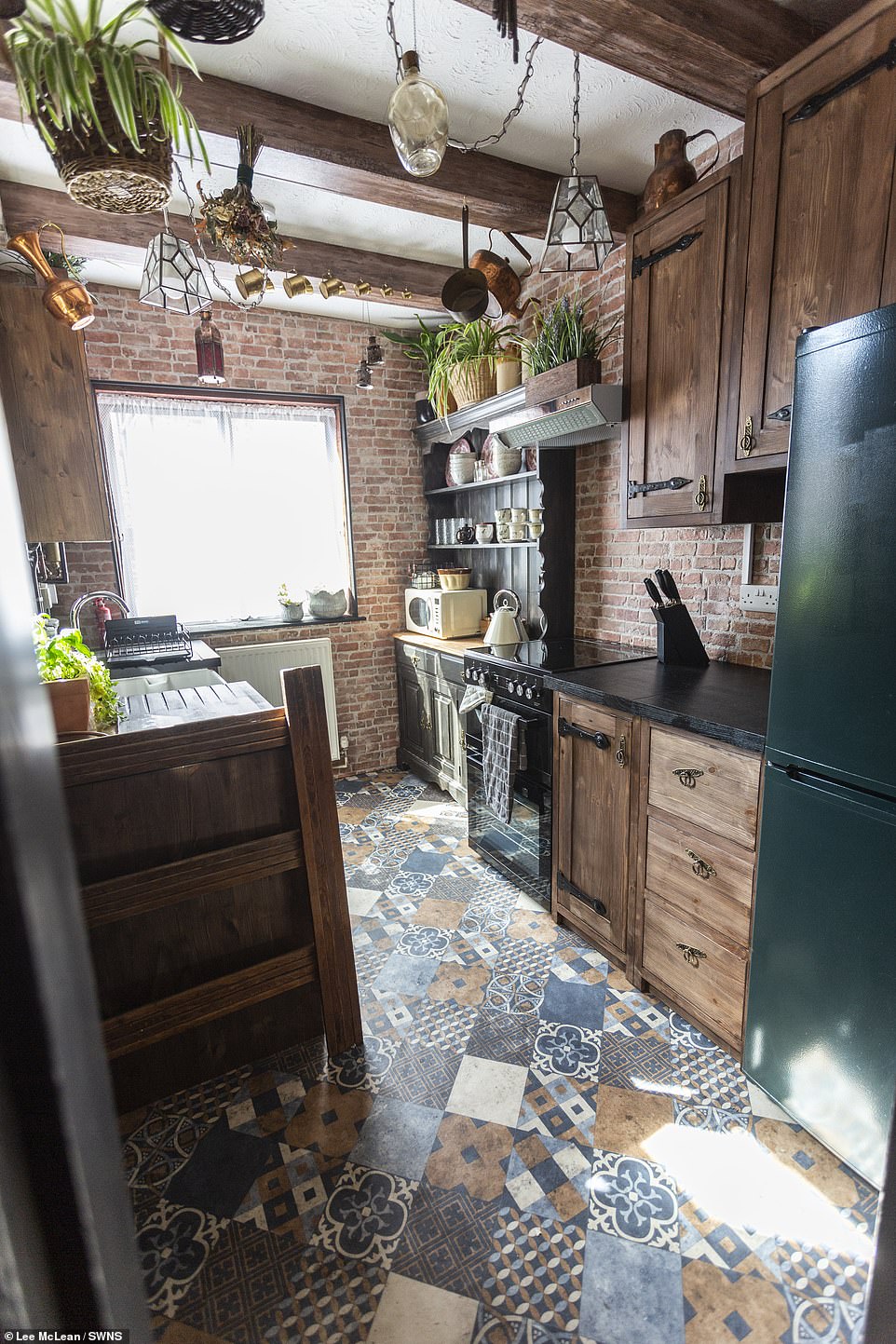 While the kitchen hosts modern contraptions such as an oven and a microwave for cooking, Hannah added a touch of rustic charm that is often found on the Harry Potter set 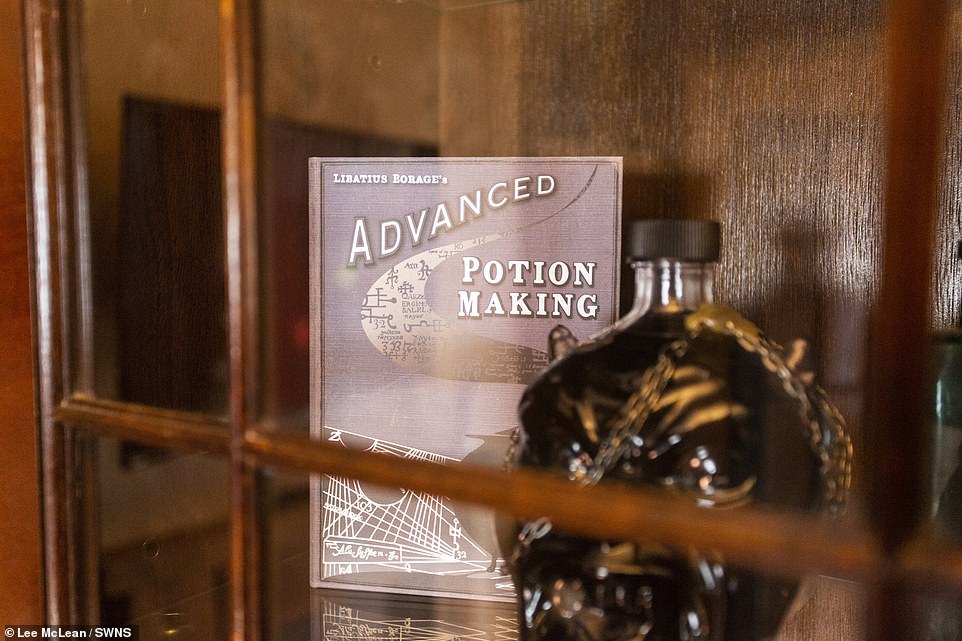 This copy of Advance Potion Making is a replica of a book used by the Hogwarts pupils in the sixth book and movie, Harry Potter and the Half Blooded Prince 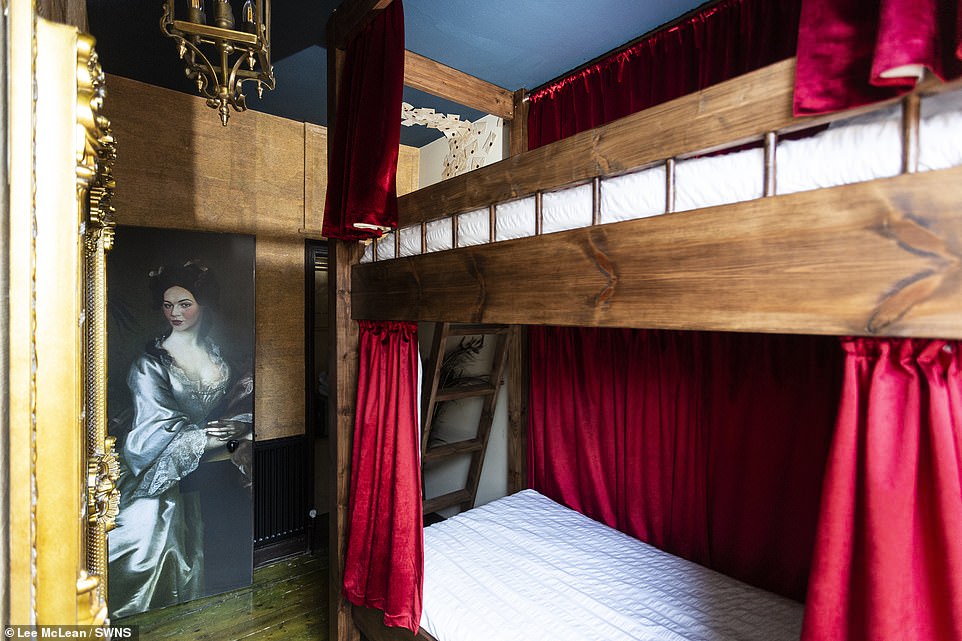 The second room hoses red bunk beds that would not be out of place in a Gryffyndor dorm. The door is covered by a print of a period painting and  Hogwarts admission letters were taped to the ceillings 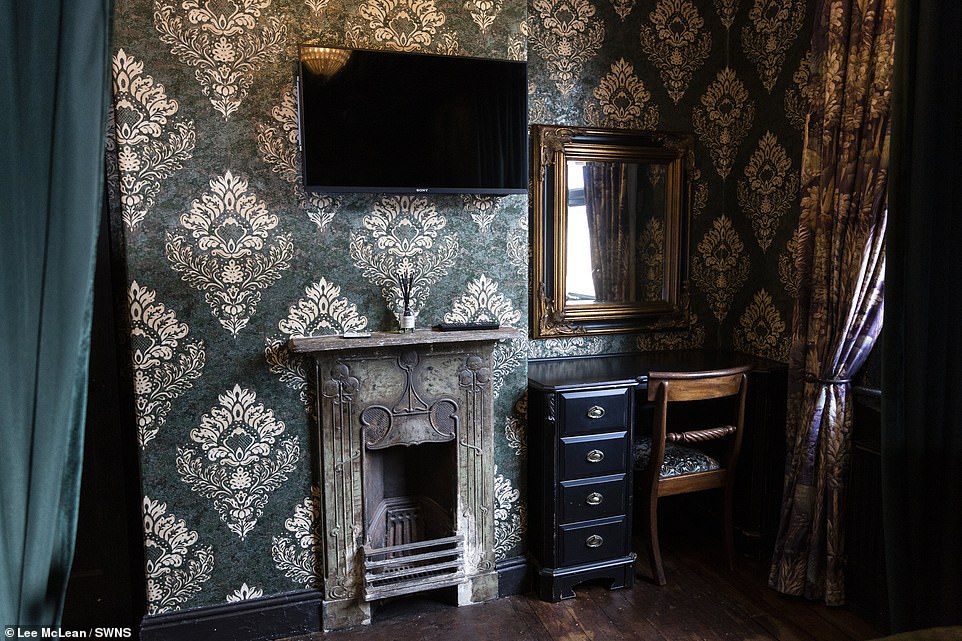 In the Slytherin room, Hannah pictured a deep green vintage wallpaper, and completed the look with dark furniture. She featured the beautiful original fireplace, but included a flat TV for her guests  – perhaps to watch Harry Potter from the comfort of this Harry Potter themed Bnb

Disclaimer: The text below is an advertorial article that was not written by Cryptonews.com journalists.The crypto market has bounced after...

A local bed and breakfast offers Southern charm and comfort in the heart of historic downtown West Monroe. The Hamilton House...

The world of digital assets has come crashing down in recent weeks. The NFT markets have taken the brunt. However,...

BNB (BNB) Makes Partial Recovery from Recent Drop, but Will It Continue Climbing?

The Binance token BNB is on the rise today after three days of significant drops. We saw the rate plummet...