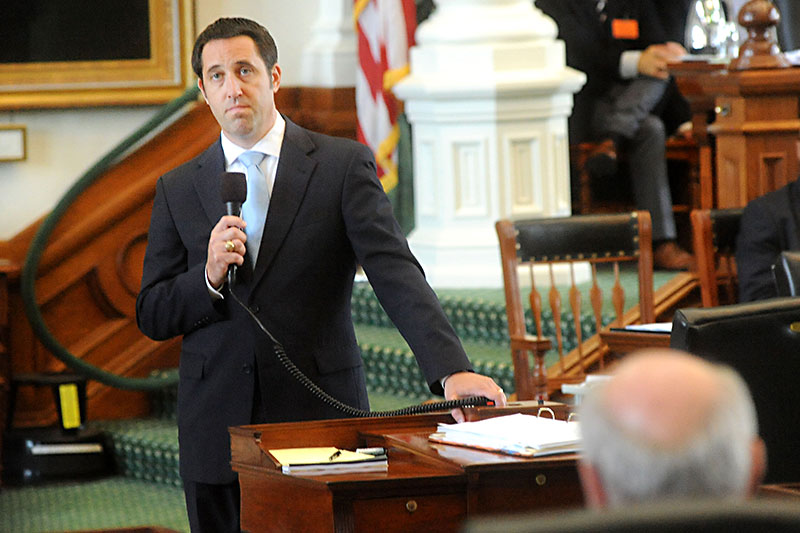 Texas Comptroller Glen Hegar has been, bit by bit, releasing the names of blacklisted green firms (photo by John Anderson)

The repercussions of Texas’ new laws targeting “woke” financial firms that seek to limit investments in fossil fuels, firearms, and the like are starting to be felt. Senate Bill 13, adopted in 2021, prohibits state retirement and investment funds, estimated to be worth about $300 billion, from doing business with financial firms that consider environmental impact in their investments.

The law is explicit: Companies that abstain from investing in fossil fuels for strictly financial reasons, rather than as an ethical or environmental position, are not banned. If they avoid fossil fuels for moral reasons, they can expect to miss out on billions in state employees’ and teachers’ pension funds. Although that’s a clear threat, the law has been hard to implement because the distinction between green firms and non-green firms is slippery.

“We know some of these companies hold investments in oil and gas today, but what about the future?” Hegar asked. “Are they selling the hope of a ‘green’ tomorrow with promises to divest or reduce their fossil fuel exposure?”

In response, nearly 90 firms wrote to the state emphasizing their investments in oil and gas companies. It is still unclear whether SB 13 persuaded these firms or others to change their sustainable policies, says Ivan Ivanov, a senior economist at the Federal Reserve Board. Some academic literature, however, predicts that it will become more likely for companies to adopt stronger sustainability practices with the rising risk of climate change, he says.

SB 13 and other legislation adopted in 2021 – including SB 19, which prohibits state entities from contracting with firms that restrict business with the firearm industry – are estimated to have cost the state between $303 million and $532 million in interest in the eight months after their passage, according to Ivanov’s research with Daniel Garrett, an assistant professor at the University of Pennsylvania’s Wharton School of Business.

The blackballed firms include not only those managing the state’s investments but the banks who underwrite the bonds issued by every Texas city, county, and school district. Anti-“woke” measures like these two bills limit the number of banks who can participate, which leads to those local governments paying higher interest rates. The laws have “caused large shifts in the public finance landscape that resulted in decreased competition and higher costs for public borrowers in Texas,” says Garrett.

Got something to say? The Chronicle welcomes opinion pieces on any topic from the community. Submit yours now at austinchronicle.com/opinion.

Filing follows weeks after FTX collapseFTX listed as BlockFi’s No.2 creditorBitcoin down over 70% from 2021 peakNov 28 (Reuters) -...

Imploded crypto company FTX’s hundreds of millions in sport sponsorships are being called into question and could cause other teams...

Expectations are high for the outcome of the ongoing Ripple lawsuit, and there are many optimistic predictions about how the crypto...

In a market with so much bearish sentiment in the past few weeks, users have looked towards cryptocurrencies like Big...