Bitcoin vs. Ethereum vs. Dogecoin: Which Is Best? 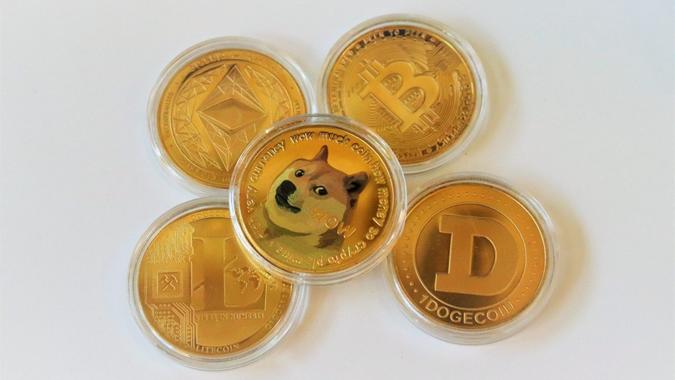 Bitcoin, ethereum and dogecoin are popular cryptocurrencies receiving a lot of recent attention. But, as they battle it out for crypto dominance, which is best?

Read: Looking To Diversify In A Bear Market? Consider These 6 Alternative Investments

What Is the Difference Between Bitcoin, Ethereum and Dogecoin?

Before any investor decides which crypto may be better than others, they should explore where each crypto comes from and the value of each.

What Is Bitcoin and How Does It Work?

Bitcoin (BTC) was the pioneer of the cryptocurrency movement. It was first a published idea by the alias “Satoshi Nakamoto” and a team of developers in 2008. The proposal of Bitcoin stemmed from a new way to transfer money through a decentralized network. In short, Bitcoin allows people to send and receive money with each other but without a third party’s involvement, such as a bank.

Fast-forward to 2022 — bitcoin has become a dominant asset in the crypto markets.

According to Coinbase, bitcoin is multifunctional and can act as:

The “value reserve” concept comes from bitcoin’s capped issuance, meaning there’s only a 21 million bitcoin supply. The scarcity of bitcoin as a digital asset gives credit to the theory. Because of this, bitcoin is often labeled as “digital gold.”

What Is Ethereum and How Does It Work?

Ethereum (ETH) is a bedrock crypto for blockchain infrastructure, making this a layer-1 blockchain solution. It has the largest developed community of any crypto asset and operates a decentralized network.

There have been almost 3,000 applications built on Ethereum — for contrast, the next-highest has only just over 300 — and its rapidly growing network has seen it maintain the title of “second-largest cryptocurrency” by market cap in the last several years.

What Is Dogecoin and How Does It Work?

Dogecoin (DOGE) is labeled as a peer-to-peer digital currency, just like bitcoin. Dogecoin is valuable because it has a purpose, much like money has a purpose.

Although the token’s utility may be questionable, those who hold the cryptocurrency can actually spend it like money at several physical locations or online, such as Tesla, GameStop, AMC Theatres and Twitch.  Consumers can also use dogecoin on sites like Bitrefill to purchase gift certificates to other sites, such as Amazon or Google Play.

Is Bitcoin Better Than Ethereum?

While investors and consumers regard bitcoin as a payment network, Ethereum is a foundation layer on which developers can build decentralized applications. Use cases spread across finance, gaming and social networking.

Another point of difference is that bitcoin operates on the proof-of-work protocol, whereas Ethereum is soon moving to proof-of-stake. Both are known as “consensus mechanisms,” which are algorithms that allow networks to cooperate and remain secure.

PoW secures networks using “mining” — a computational power to solve complex mathematical equations. However, PoS lets those holding the cryptocurrency “stake” their crypto to secure the network, and in exchange, they receive a reward.

Of the two, PoW is the more secure option than PoS. So, while investors may regard bitcoin as more secure, they may find that Ethereum has more potential use cases as blockchain technologies develop.

Which Is Better: Bitcoin or Dogecoin?

Since bitcoin is capped in supply, investors likely find it a better value reserve than dogecoin, which can technically be issued forever.

Additionally, despite dogecoin having a faster method of payment — 33 transactions per second versus bitcoin’s seven — the utility of bitcoin is far ahead. The introduction of the Bitcoin Lightning Network has made transactions low-cost, fast and scalable.

What Is Better: Ethereum or Dogecoin?

Ethereum’s network provides far more use cases than dogecoin. Despite this, dogecoin is much more efficient for transacting. It costs roughly $0.06 to transact in dogecoin on average, according to Messari. ETH transactions, in comparison, have to pay a gas fee. While this can be a fraction of a cent, it can also be more than $100.00, depending on demand.

Ethereum intends to address this issue through “sharding,” a development that will make secure distribution and transactions cheaper.

Which Has the Most Upside Potential: Bitcoin, Ethereum or Dogecoin?

Wondering which cryptocurrency is set to explode? Here are the price predictions for each crypto over the next several years.

Coin Price Forecast estimates the following values for each crypto at year-end in 2022.

Coin Price Forecast estimates the following values for each crypto at year-end in 2025.

Coin Price Forecast estimates the following values for each crypto at year-end in 2030.

From a utility and risk-reward perspective, both bitcoin and ethereum seem to be better long-term picks than dogecoin. Moreover, the long-term growth trends for both suggest they will be the future dominant digital assets in the crypto markets.

Our in-house research team and on-site financial experts work together to create content that’s accurate, impartial, and up to date. We fact-check every single statistic, quote and fact using trusted primary resources to make sure the information we provide is correct. You can learn more about GOBankingRates’ processes and standards in our editorial policy.

Millennials Sour on Bitcoin, Ethereum, Dogecoin and Other Cryptocurrencies

Millennials Sour on Bitcoin, Ethereum, Dogecoin and Other Cryptocurrencies

Editorial IndependenceWe want to help you make more informed decisions. Some links on this page — clearly marked — may...

Ethereum Gold Project (ETGP) has a Bullish Sentiment Score, is Rising, and Outperforming the Crypto Market Thursday: What’s Next?

Ethereum Classic (ETC) has been relatively average in terms of volatility when compared to other cryptocurrencies. So far Thursday, the...

One Ethereum (ETH)-based altcoin is surging by nearly 30% this week as it outpaces both the king crypto and the...

What is Solana (SOL)? Explaining one of the Fastest Layer-1s