The Cardano charts post-Vasil are looking promising, according to Stock Money Lizards.

As you already know from following crypto, one of the most obvious price catalysts for a cryptocurrency project is a technical upgrade. It very regularly gives a project a spike in price in the lead-up, and then a big drop after. Cardano’s smart contract release, as well Ethereum’s merge, are great examples.

Cardano, for one, seemingly languished for almost a year after its smart contract upgrade before starting to see an uptick again as hype for the Vasil upgrade surfaced. Cardano fell from its high of $3.09 USD to as low as $0.43 by 2022. But the truth is, the Vasil upgrade never helped Cardano all that much.

ADA briefly spiked back up to $0.65 USD but then went back to languishing as it did since the release of smart contracts. To be fair, this was during a downturn for all of crypto.

Was it the macro? Interest in the project waning? General bear market blues? It’s unclear why ADA’s price never quite took off again. Perhaps all three options played some part.

More interestingly, since the release of Vasil on September 22nd, ADA hasn’t dropped all that much. In fact, it’s fallen just around 6.5% ($0.46 to $0.43). Compare that to the almost 20% drop in a week after Cardano’s Alonzo upgrade. 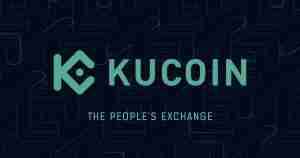 So ADA barely sees any positive price action from a catalyst, and then barely falls after the catalyst is over. What does this say about Cardano and ADA moving forward?

Stock Money Lizards provided us with some charts that point to considerable upside for Cardano post-Vasil. That is, as long as everything goes as planned…

In other words, all that ADA price stagnation could actually be a good thing. The fact that it hasn’t moved too much in either direction shows its keeping to previously held support — support that saw ADA eventually explode past 3 dollars.

However, Stock Money Lizards don’t believe that a big move is neccesarily imminent from Cardano. “There‘s a descending trendline with 3 touches, we believe this could also be a scenario for Cardano‘s near future. There‘ll be more sideways now but we believe in this being the bottom. The weekly RSI is low aswell.” 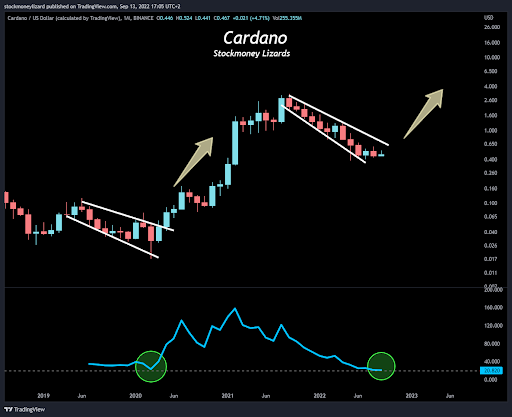 Beyond RSI and past price, Stock Money Lizards also looked at Bollinger bands. “Cardano is in a broadening falling wedge formation in the monthly timeframe. This setup pretty much resembles 2020. CCT Bollinger Bands Oscillator shows us. We‘re once again in the oversold region.”

However, the analysts caution that thanks to macro uncertainty “we could go sideways for 1 or 2 months before an uptrend. Downside risk in our opinion ~ – 20%.”

Certainly, there’s room for downside, all things considered. But one thing is for sure, the future looks bright for Cardano, catalysts or not.

For more of Stock Money Lizards, check out their official site and Twitter.

Here’s How To Stay Up To Date On Crypto With CRU News Desk!

For the best exchanges, check out our top exchange guide.

Sign up for our bi-weekly newsletter for news and exclusive analysis.

Learn about Bitcoin, Ethereum, and so much more at the CryptosRus Academy.

Stay up to date with George on Tik Tok, Instagram, and his brand new clips channel.

Number of Cardano smart contracts grows over 300% in 2022

Since the introduction of the smart contracts feature on the Cardano (ADA) network, the metric is recording increased growth helping...

Cryptocurrency, sometimes known as “digital money,” is a form of digital currency that is traded online and recorded in a...

$ADA: There Are Currently 1,146 Projects Building on Cardano