After recovering off the $20,265 support level, the Bitcoin price is now approaching $20,534, trading in the green during the Asian session. Similarly, Ethereum is close to reaching the 78.6% Fibonacci retracement level at $1,594 after rising by less than 0.50%.

The global crypto market cap increased by almost 0.50% to $1.01 trillion the day before, which helped major cryptocurrencies start November 1 in the green. The total volume of the crypto market increased by 22% on the previous day to reach $87.63 billion.

Ahead of the US Federal Reserve’s monetary policy and rate announcement later this week, the market is generally trading risk-on.

The price of Ethereum is at $1,494 with a $44 billion 24-hour trading volume. Ethereum has grown by more than 18% during the past week. With a live market value of $195 billion, down from $199 billion yesterday, CoinMarketCap is now ranked second.

On the 4-hour chart, the ETH/USD pair has developed an upward channel that is supporting it near the $1,550 level. A “three white soldiers” candlestick pattern is developing on Ethereum right now, signalling considerable upside potential.

RSI and MACD, two leading indicators, are remained in the purchase zone. As a result, there is still a good likelihood of a bullish correction above $1,550. A breach below here might expose ETH to $1,404 today, at the same time.

The price of one bitcoin is $20,440, and $44 billion worth of transactions take place every day. During the Asian session, Bitcoin is holding with gains close to 0%. As investors wait for the US Federal Reserve to decide on interest rates, the BTC/USD has increased more than 6% over the past seven days.

Since it continues to trade in line with our forecast for the price of bitcoin throughout the European session, the technical outlook for bitcoin is largely intact.

The Fibonacci retracement levels of 38.2% to 61.8% have been used to construct a broad trading range of $20,000 to $21,000, within which the BTC/USD has been consolidating. However, BTC’s trading inclination is still optimistic.

The current rise is likely to continue, according to the relative strength index and moving average convergence divergence (RSI and MACD), which are still in the bullish zone. Furthermore, the 50-day moving average indicates buying if the price is greater than $19,750.

Therefore, if the present purchasing trend continues, it might reach a new high of $21,900 if it breaks over the 61.8% Fibo line. The price of Bitcoin may rise to $22,500 if the current trend holds.

The immediate support level for Bitcoin is still close to $20,250. Investors may try to purchase today above $20,250; however, additional purchases may be observed upon a positive breakout of $21,000.

Despite today’s advances, the 30-day performance of ADA is still down by 4%. However, according to its technical indicators, an upswing has already started, and more gains could be on the horizon in the near and medium term. 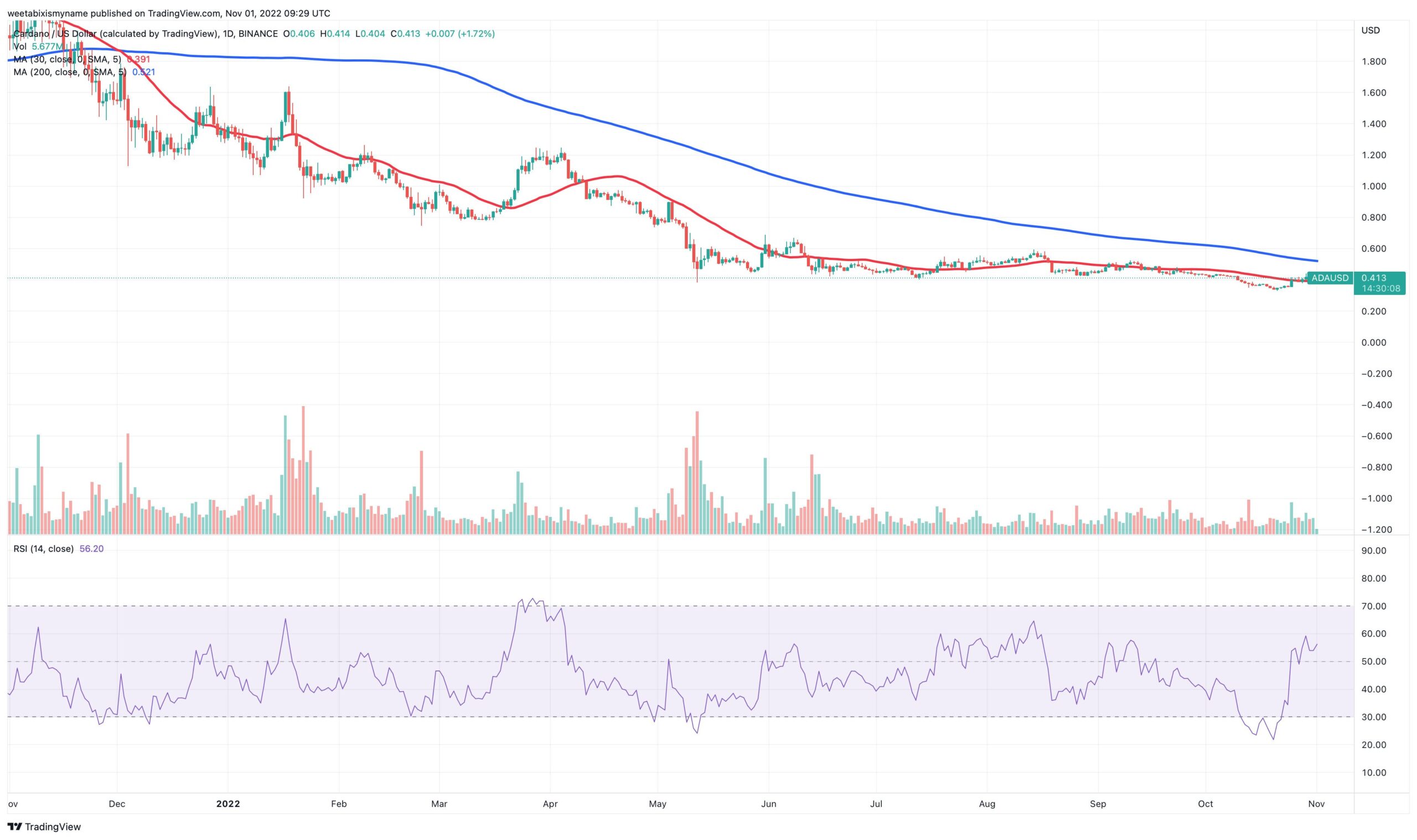 The relative strength index (purple) for ADA increased from from 20 to almost 60 today during the last few weeks. This indicates increasing momentum, which may easily last if general market circumstances keep becoming better.

The altcoin has lots of lost ground to make up and is due for a rebound, but at the same time, its 30-day moving average (red) is still below its 200-day average (blue).

Such an anticipation is undoubtedly justified when taking a look at Cardano’s fundamentals. This is due to the fact that the Cardano ecosystem has experienced continuous growth over the past few months, with more than 1,100 apps and projects currently relying on its network, despite this year’s bear market.

Cardano, which released smart contract capabilities in September 2021, has already seen the launch of 100 projects. Since then, more than 3,500 Plutus scripts (smart contracts) have been implemented, indicating the blockchain’s increasing activity.

Cardano’s gradually rising total value locked figure reflects this. This amount, at $70 million, is still little in comparison to chains with a larger user base, like Ethereum and Binance Chain, but it’s important to remember that it was only $1 million at the beginning of the year.

Cardano also keeps releasing significant technological improvements. This includes the Vasil improvement from this past September, which increases throughput (by lowering the delay of block transfer) and facilitates dapp development (via changes to the Plutus smart contract language).

Cardano is currently significantly undervalued as a result of these changes. Even while it only has a small portion of Ethereum’s TVL, it ranks as the ninth-largest cryptocurrency by market value, suggesting that once crypto returns to an expansionary phase, it might easily surge much higher.

In fact, it’s likely that ADA will rise over its current ATH of $3.09 during the following bull market (set last September). While it’s difficult to forecast just how much it might surpass this record, some experts have put the coin’s long-term aim at about $5.30.

The final price of ADA for this year will depend on how much the market rallies at the conclusion of the year. It is quite likely to finish above $0.50 assuming a large advance, while stronger rallies may push it as high as $1, which it last reached in early April.

According to reports, Indigo Protocol topped the list of projects with the highest increase in unique account growth, recording 62,109...

The ecosystem builder for one of the first decentralized exchanges on the Cardano blockchain, Adaswap, was claimed to have opened on...

Strategize for Surviving the Crypto Winter of 2022 by Buying Into Rocketize, Cardano, and BinaryX

Strategize for Surviving the Crypto Winter of 2022 by Buying Into Rocketize, Cardano, and BinaryX by Market Trends December 1,...

The recent collapse of crypto exchange FTX highlights the “absolute need” for decentralization, according to Cardano founder Charles Hoskinson.Speaking at...